Don’t ask me why I wanted to address these today, especially since my recipe is anything but gross. I guess I’ve just had it listening to these words. “Moist” is the obvious one discussed in the past. But there are a few more cringe worthy ones.

So let’s get started.

Especially if it’s self-proclaimed.  Like, “I’m such a foodie!  I’m looking for other foodies so we can talk about food!”    Next time just say: “I’m a virgin”

Bleh! I cant express the gaul I have towards this word! Celebrities avoid paparazzi not because of the damaging photos, but because they know some dopey tabloid writer is going to use this word.

If you call your sex ‘coitus’, you’re probably not having a lot of it.

Everyone likes to use this, because no one admits to being on a diet. But frankly, all this means to me is that your eating windex and comet.

This word has been used to death.  By me.  Mostly by me.  It’s gross and nasty now.

I feel like when this word is used to describe something, its anything but. Or it sounds painful.

You stayed home on your vacation?  And the only word you could think of during all that time was this?

If it’s heard at a shooting range?  Fine.  In a doctor’s office?  Not so fine.

Really?  Does this call for an explanation?

Alright, what words are you cringing at?

And to make you feel better, I’ve developed a homemade cereal that uses up all the extra peanut flour I hoarded from Trader Joe’s when they said they were discontinuing it. They lied. Its still there and now I have more peanut flour than I know what to do with.

. Preheat oven at 375F. If using a cookie sheet with edges, flip it over (so you get a flat top) and grease it with some oil spread. Or you can use a flat cookie sheet and grease the same. Meanwhile combine together the dry and wet ingredients into a smooth dough. Divide the dough into two equal parts and roll each half directly on the greased cookie sheets. Roll as thin as possible (I used a pasta maker but plain old elbow grease rolling will work. I’m just lazy) and using a knife/pizza cutter score it into diamonds/squares directly on the cookie sheet; do not separate. Bake for 8-15 minutes. The baking time depends on the thickness of the rolled out dough.The first set I baked was thicker than the second set. You’ll be able to smell the cocoa and also can see that the pieces around the edges turning sort of black. Keep a watch and remove the pans immediately out of the oven. The pieces will start coming off while you are removing it from thee sheet. Spread it on a plate or another cool sheet. Once the chocolate squares have cooled completely store it in an airtight jar or ziploc bag. 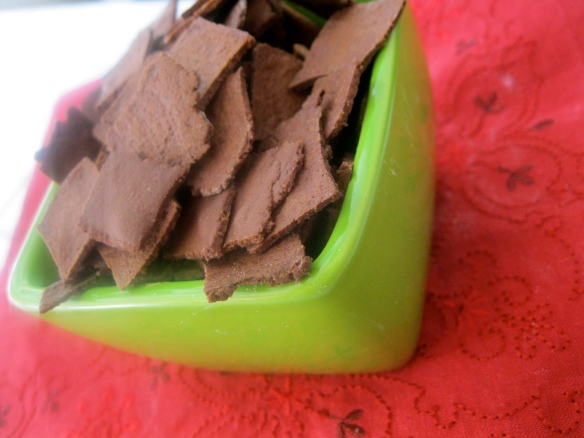